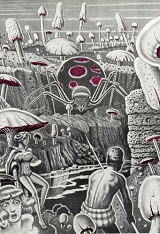 Rather late today, but there is a good selection of free fiction today, including a classic Leinster novel at Project Gutenberg and double shots of Beam Me Up and Drabblecast in audio fiction.


Fiction
• At Author's Site: "SeniorSource" by Kristine Kathryn Rusch. Science Fiction.
"The little boy lay face down in the dirt. Because the brown dirt was fine, loose, and powdery, I thought he had landed outside the dome, but that didn’t quite match with what I was seeing. His body was intact which it would not have been if it had been exposed to the harshness of the actual Moon"

• At Black Gate: "Falling Castles" by Jamie McEwan. Fantasy.
"Early the next morning, still sans Tanek, King Bertham the Just girded on his sword, mounted his charger, and led his troops to the center of the high meadow to await King Luzak’s forces. It was a brave day, with a bright sun breaking just above the mountains, and Bertham felt almost cheerful. Let them come soon, he thought, while my mood holds."

• At Daily Science Fiction: "Remembrance" by David G. Uffelman. Science Fiction.
"The news first came to the Old Mother through her feet. She leaned forward to rest more weight on the cartilaginous nodes within her padded front feet to create a solid connection with the earth, the better to receive the seismic signals that traveled through the bedrock beneath the gentle rolling grasslands of the Highveld."

• At HiLobrow: "Theodore Savage - part 18" by Cicely Hamilton. Science Fiction. 1922.
"When war breaks out in Europe — war which aims successfully to displace entire populations — British civilization collapses utterly and overnight. The ironically named Theodore Savage, an educated and dissatisfied idler, must learn to survive by his wits in the new England, where 20th-century science, technology, and culture are regarded with superstitious awe and terror."

• At L5R: "Treaty" by Seth Mason. Fantasy.
"A conversation between two Champions yields insight into the nature and present status of their clans."m

• At Project Gutenberg: "Nightmare Planet" by Murray Leinster. Science Fiction. 1953.
"Burl opened his mouth to shout furiously at them. But it was not a good idea for humans to draw attention. Spiders did not hunt by scent, but sound sometimes drew them. Burl closed his mouth again, in a taut straight line. The men looked at him supplicatingly. They had never been lost, and so had never learned to think even a little."

• At Strange Horizons: "In Joy, Knowing the Abyss Behind (Part 2)" by Sarah Pinsker.
"George had only ever taken one trip without Millie, in the fall of 1951. A letter had arrived from the army asking him to fly to New Mexico."

Flash Fiction
Audio Fiction
• At Beam Me Up: Episode #373. Science Fiction.
"To Bere Arms" by Wes Parish and part 3 of Edward McKeown’s "In the Mourning."

• At Beam Me Up: Episode #372. Science Fiction.
"Trath: Return of the Quellers" by David Scholes and part 2 of Edward McKeown’s "In the Mourning."

• At Drabblecast: "Unique Chicken Goes in Reverse" by Andy Duncan. Strange.
"Father Leggett stood on the sidewalk and looked up at the three narrow stories of gray brick that was 207 East Charlton Street. Compared to the other edifices on Lafayette Square—the Colonial Dames fountain, the Low house, the Turner mansion, the cathedral of course"

• At Drabblecast: "Sweetie" by Michelle Ann King. Horror. Strange.
"Admittedly, my little travelling show isn’t what it once was. We’ve been on the road for a long, long time. But I like to think that for the discerning customer, we still provide value for money. An experience you can’t get from the computer screen"

• At SFFaudio: "The Machine Stops" by E.M. Forster.
"Imagine, if you can, a small room, hexagonal in shape, like the cell of a bee. It is lighted neither by window nor by lamp, yet it is filled with a soft radiance. There are no apertures for ventilation, yet the air is fresh. There are no musical instruments, and yet, at the moment that my meditation opens, this room is throbbing with melodious sounds."

• At SFFaudio: "The Tower Of The Elephant" by Robert E. Howard. Fantasy.
"A strange, blood-freezing story of an idol that wept on its throne, and a valorius barbarian from the fringes of an elder civilization. First published in Weird Tales, March 1933."

• At Strange Horizons: "In Joy, Knowing the Abyss Behind (Part 2)" by Sarah Pinsker.
"George had only ever taken one trip without Millie, in the fall of 1951. A letter had arrived from the army asking him to fly to New Mexico."

• At The Way of the Buffalo: "To the End of Time, or Lisa" by Damien Krsteski. Science Fiction.
"Some people really do get a second chance to make a first impression in this week's story,"

Thanks! Will link it.