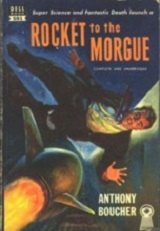 Hugo award winning co-editor of The Magazine of Fantasy & Science Fiction from 1949-1958, Boucher also wrote science fiction stories, as well as mysteries.  His short story "The Quest for St. Aquin" (linked below), as noted in Wikipedia, was "among the stories selected in 1970 by the Science Fiction Writers of America as one of the best science fiction short stories of all time."  Only a couple of his stories are currently freely available.


Fiction
• "The Quest for St. Aquin" Science Fiction.
"The Bishop of Rome, the head of the Holy, Catholic and Apostolic Church, the Vicar of Christ on Earth—in short, the Pope—brushed a cockroach from the filth-encrusted wooden table, took another sip of the raw red wine, and resumed his discourse."