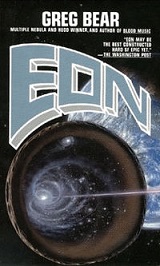 Gregory Dale Bear (born August 20, 1951)
Bear is an exceptional hard science fiction writer who has written at least 44 books.  He has been nominated for numerous awards, including Hugo, Nebula, and Locus awards.  Fortunately a few short stories by this author are available for online reading. And his official site is here.


"Blood Music"
"There is a principle in nature I don't think anyone has pointed out before. Each hour, a myriad of trillions of little live things—bacteria, microbes, "animalcules"—are born and die, not counting for much except in the bulk of their existence and the accumulation of their tiny effects. They do not perceive deeply. They do not suffer much. A hundred billion, dying, would not begin to have the same importance as a single human death."

"Sisters"
"But you're the only one, Letitia." Reena Cathcart lay a light, slender hand on her shoulder with a look of utmost sincerity. "You know none of the others can. I mean . . ." She stopped, the slightest hint of awareness of her faux pas dawning. "You're simply the only one who can play the old—the older—woman."

"Webster"
"It lingered in the air, a dead and sterile word made for whispers. Vultures fanned her hair with feather-duster wings. Up the dictionary's page ran her lean finger, wrapped in skin like pink parchment, and she found Andrews, Roy Chapman, digging in the middle of the Gobi, lifting fossil dinosaur eggs cracked and unhatched from their graves."

"The White Horse Child"
"When I was seven years old, I met an old man by the side of the dusty road between school and farm. The late afternoon sun had cooled, and he was sitting on a rock, hat off, hands held out to the gentle warmth, whistling a pretty song. He nodded at me as I walked past. I nodded back. I was curious, but I knew better than to get involved with strangers. Nameless evils seemed to attach themselves to strangers, as if they might turn into lions when no one but a little kid was around."

"Richie by the Sea"
"The storm had spent its energy the night before. A wild, scattering squall had toppled the Thompson's shed and the last spurt of high water had dropped dark drift across the rocks and sand. In the last light of day the debris was beginning to stink and attract flies and gulls. There were knots of seaweed, floats made of glass and cork, odd bits of boat wood, foam plastic shards and a whale."

"Petra"
"I'm an ugly son of stone and flesh, there's no denying it. I don't remember my mother. It's possible she abandoned me shortly after my birth. More than likely she is dead. My father—ugly beaked half-winged thing, if he resembles his son—I have never seen."

"The Man Who Would Be Kzin" with S. M. Stirling
"I am become overlord of a fleet of transports, supply ships, and wrecks!" Kfraksha-Admiral said. "No wonder the First Fleet did not return; our Intelligence reports claimed these humans were leaf-eaters without a weapon to their name, and they have destroyed a fourth of our combat strength!" 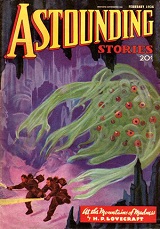 Howard Phillips Lovecraft (August 20, 1890 – March 15, 1937)
Despite his short life, Lovecraft is certainly a contender for greatest horror writer of all time. His stories of eldritch cosmic horrors have and will continue to have, as Joyce Carroll Oats noted "an incalculable influence on succeeding generations of writers of horror fiction"  Lovecraft created a mythology, a feat very few writers can lay claim to.  Fortunately there are countless Lovecraft stories and adaptation freely available below is just a sampling.

• At Cthulhu
Numerous readings at this Lovecraft centered site.

• At Pseudopod: "The Music of Erich Zann" by Howard Phillips Lovecraft.

• At Tales to Terrify:
Comic Book
• At The Horrors of It All: "Wentworth's Day"

The title of the first Greg Bear story on your list should be "Blood Music," not "Blood Magic".

Thanks again. Unfortunately, I rarely have time to proofread these posts as well as I'd like - as you can tell. [My deleted comment had a typo]