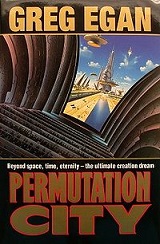 Greg Egan (born 20 August 1961)
Egan, a hard sf writer, has won a Hugo award and been nominated several times in the novella and novelette categories, and won a John W. Campbell Award for his novel Permutation City.  Many of his stories are freely available online.


Fiction
• "Border Guards" Science Fiction.
"The wave function appeared as a vivid auroral light, a quicksilver plasma bright enough to be distinct in the afternoon sunlight, yet unable to dazzle the eye or conceal the players running through it. Bands of colour representing the complex phase of the wave swept across the field, parting to wash over separate rising lobes of probability before hitting the boundary and bouncing back again, inverted."

• "Closer" at Eidolon. Science Fiction.
"I desperately wanted to believe that other people were somehow knowable, but it wasn't something I could bring myself to take for granted. I knew there could be no absolute proof, but I wanted to be persuaded, I needed to be compelled."

• "Crystal Nights" at Interzone. Science Fiction.
"She frowned slightly, but she was willing to play along. She ran some standard benchmarks. Daniel saw her squinting at the screen, one hand almost reaching up to where a desktop display would be, so she could double-check the number of digits in the FLOPS rating by counting them off with one finger. There were a lot more than she’d been expecting, but she wasn’t seeing double."

• "The Demon's Passage" at Eidolon. Science Fiction.
"Somebody out there, show your compassion, come and kill me. Cut me free and watch me slowly shrivel, or slice me up and flush me down a toilet. Any way you like, I don't mind. Come on! You do it for your youngest children, you do it for your sick old parents. Come and do it for me."

• "The Extra" at Eidolon. Science Fiction.
"Daniel Gray didn't merely arrange for his Extras to live in a building within the grounds of his main residence - although that in itself would have been shocking enough. At the height of his midsummer garden party, he had their trainer march them along a winding path which took them within metres of virtually every one of his wealthy and powerful guests."

• "Glory" [opens PDF] Science Fiction.
"An ingot of metallic hydrogen gleamed in the starlight, a narrow cylinder half a meter long with a mass of about a kilogram. To the naked eye it was a dense, solid object, but its lattice of tiny nuclei immersed in an insubstantial fog of electrons was one part matter to two hundred trillion parts empty space. A short distance away was a second ingot, apparently identical to the fi rst, but composed of antihydrogen."

• "Mind Vampire" Science Fiction.
"There are moments when my mind misses a beat. I find myself, in mid-step or mid-breath, feeling as if delivered abruptly into my body after a long absence (spent where, I could not say), or a long, dreamless sleep. I lose not my memory, merely my thread. My attention has inexplicably wandered, but a little calm introspection restores my context and brings me peace. Almost peace."

• "The Moral Virologist" at Eidolon. Science Fiction.
"The schematic of the protein molecule trembled very slightly. Shawcross grinned, already certain of success. As the pH displayed in the screen's top left crossed the critical value - the point at which, according to his calculations, the energy of conformation B should drop below that of conformation A - the protein suddenly convulsed and turned completely inside-out."

• "Neighborhood Watch" Science Fiction.
"My retainers keep me on ice. Dry ice. It slows my metabolism, takes the edge off my appetite, slightly. I lie, bound with heavy chains, between two great slabs of it, naked and sweating, trying to sleep through the torment of a summer's day."

• "Oceanic" - Hugo Winner. Science Fiction.
"The swell was gently lifting and lowering the boat. My breathing grew slower, falling into step with the creaking of the hull, until I could no longer tell the difference between the faint rhythmic motion of the cabin and the sensation of filling and emptying my lungs. It was like floating in darkness: every inhalation buoyed me up, slightly; every exhalation made me sink back down again."

• "Only Connect" at Nature. Flash. Science Fiction.
"A theory in which the building blocks of the Universe are mathematical structures — known as graphs — that do nothing but connect has just passed its first experimental test."

• "Oracle"  Science Fiction.
"He'd woken a dozen times throughout the night with an overwhelming need to stretch his back and limbs, and none of the useful compromise positions he'd discovered in his first few days — the least-worst solutions to the geometrical problem of his confinement — had been able to dull his sense of panic."

• "The Planck Drive" Science Fiction.
"Gisela was contemplating the advantages of being crushed — almost certainly to death, albeit as slowly as possible — when the messenger appeared in her homescape. She noted its presence but instructed it to wait, a sleek golden courier with winged sandals stretching out a hand impatiently, frozen in mid-stride twenty delta away."

• "Riding the Crocodile" Science Fiction.
"Before dying, though, they wanted to attempt something grand and audacious. It was not that their lives were incomplete, in need of some final flourish of affirmation. If some unlikely calamity had robbed them of the chance to orchestrate this finale, the closest of their friends would never have remarked upon, let alone mourned, its absence. There was no aesthetic compulsion to be satisfied, no aching existential void to be filled. Nevertheless, it was what they both wanted, and once they had acknowledged this to each other their hearts were set on it."

• "Scatter My Ashes" Science Fiction.
"Usually what we witness verges on the mundane. Drunken young men fighting, swaying about with outstretched knives, cursing incoherently. Robbery, bashings, rape. We wince to see such violence, but we can hardly be shocked or surprised any more, and we're never tempted to intervene: it's always far too cold, for a start! A single warm exhalation can coat the window pane with mist, transforming the most stomach-wrenching assault into a safely cryptic ballet for abstract blobs of light."

• "Singleton" Science Fiction.
"Twenty metres down the alley, a man was lying on his back on the ground, shielding his bloodied face with his hands, while two men stood over him, relentlessly swinging narrow sticks of some kind. At first I thought the sticks were pool cues, but then I noticed the metal hooks on the ends. I'd only ever seen these obscure weapons before in one other place: my primary school, where an appointed window monitor would use them at the start and end of each day. They were meant for opening and closing an old-fashioned kind of hinged pane when it was too high to reach with your hands."

• "TAP" at Infinity Plus. Science Fiction.
"I said carefully, 'The coroner returned an open finding. I'm not a lawyer, but I imagine Third Hemisphere would still settle out of court for a significant -- '"

• "The Vat" at Eidolon. Science Fiction.
"There's no hiding it. You can see it in his eyes, in the heat distribution on his skin, in the twists and whorls of his brain's magnetic field."

• "Worthless" at Infinity Plus.  Science Fiction.
"I know what they say, the revisionists, the explainers: you were a glitch, an aberration; a bug in the software, nothing more. People could never have truly wanted to hear your 'maudlin' voice, your 'mealy mouthed whining,' your 'smothering self pity.'"

• "Yeyuka" at Infinity Plus. Science Fiction.
"I touched the ring on my left index finger, and felt a reassuring pulse through the metal. Blood flowed constantly around the hollow core of the device, diverted from a vein in my finger. The ring's inner surface was covered with billions of tiny sensors, spring-loaded funnel-shaped structures like microscopic Venus fly-traps, each just a few hundred atoms wide"