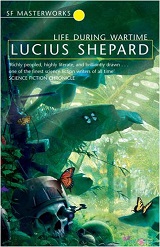 Lucius Shepard (born August 21, 1947)
A prestigious Science Fiction, Fantasy, and Magic Realism writer, Shepard has won Hugo, Nebula, World Fantasy, and John W. Campbell awards and been nominated numerous times.  Not surprisingly, such a successful writer has many stories legally and freely available. Give a few stories a read or listen and if you like them, consider buying some of his other work from you favorite e-seller or brick and mortar bookstore.


• "The Man Who Painted The Dragon Griaule"
"In 1853, in a country far to the south, in a world separated from this one by the thinnest margin of possibility, a dragon named Griaule dominated the region of the Carbonales Valley, a fertile area centering upon the town of Teocinte and renowned for its production of silver, mahogany, and indigo. There were other dragons in those days, most dwelling on the rocky islands west of Patagonia —tiny, irascible creatures, the largest of them no bigger than a swallow."

• "The Night of White Bhairab"
"In Nepal, as in India, demons and gods seem to merge into one another, and can assume terrible shapes—that of various animals, or thousand-armed giants, or monsters with the heads and limbs of beasts. Nepal is a place of shifting shape-changers, a place where the face of the god Bhairab stares down into the festival-crowded streets of Durbar Square, and mischievous local spirits called kaa flow and pool like dark shadows"

• "Salvador"
"Three weeks before they wasted Tecolutla, Dantzler had his baptism of fire. The platoon was crossing a meadow at the foot of an emerald-green volcano, and being a dreamy sort, he was idling along, swatting tall grasses with his rifle barrel and thinking how it might have been a first-grader with crayons who had devised this elementary landscape of a perfect cone rising into a cloudless sky, when cap-pistol noises sounded on the slope."

• At The Inferior 4 + 1:  "After Ildiko"
"Pederson, an idler, a self-deceiver, an American fool of no consequence, on vacation from a life of petty crime and monumental indecision, fell in with Ildiko on the Caribbean coast of Guatemala, and together they traveled by barge up the Rio Dulce toward the oil fields at Lake Izabal."

• At Infinity Plus: "The Jaguar Hunter"
"It was his wife's debt to Onofrio Esteves, the appliance dealer, that brought Esteban Caax to town for the first time in almost a year."

At Internet Archive: [via Wikipedia]


• "Abimagique"
"A child-woman, you imagine, who dotes on books about famous poisoners and has several of the more painful piercings. Typical Goth material."

• "Aztechs"
"Papa's always saying there's too many people in the world, but what's he know … Old fool! Sitting home alone all day with his mezcal and his reefer. Drifting, dozing, dreaming."

• "Emerald Street Expansions"
"I went down to Emerald Street in search of something new, an attitude with keener claws, a sniper's calm and distant eye, a thief's immersion in the night."

• "The Emperor"
"Bless the moon, McGlowrie said to himself. Under bitter smokes and clouds of poison, here we are forbidden the lights of heaven, but lack especially the moon"

• "Jailwise"
"During my adolescence, despite being exposed to television documentaries depicting men with weightlifter chests and arms, wearing ponytails and wife-beater undershirts, their bodies spangled with homemade tattoos, any mention of prison always brought to my mind a less vainglorious type of criminal, an image derived, I believe, from characters in the old black-and-white movies that prior to the advent of the infomercial tended to dominate television's early morning hours"

• "Liar's House"
"In the eternal instant before the Beginning, before the Word was pronounced in fire, long before the tiny dust of history came to settle from the flames, something whose actions no verb can truly describe seemed to enfold possibility, to surround it in the manner of a cloud or an idea, and everything fashioned from the genesis fire"

• "Over Yonder"
"It was a black train carried Billy Long Gone away from Klamath Falls and into the east. Away from life itself, some might say. And if you were to hear the stories of those who watched it pass, you'd have to give credence to that possibility "

• "Señor Volto"
"Ladies and gentlemen! I have come to your beautiful village tonight … and I offer this compliment without irony, with no hint of ridicule, for your village is, indeed, beautiful. Far more beautiful than even you who dwell here know."

• "A Walk in the Garden"
"It begins at the foot of a mountain, a slice of which has been carved away by bombardment to expose a field of yellow flowers beneath—it looks as if the entire base is hollow, an immense cave utilized for this pretty purpose."


• "Sylgarmo’s Proclamation"
"Revenge is one of the oldest and most primal of human motives, and in the fast-paced tale that follows, it drives a battle-scaredscarred warrior to the ends of the Dying Earth—and perhaps to the end of the Dying Earth itself!"

• "The Taborin Scale"
"If a man can be measured by the size of his obsessions, George Taborin might have been said to be a very small man, smaller even than the quarter-men rumored to inhabit the forests of Tasmania."

• "Vacancy"
"He might never have noticed anything if he hadn’t become fascinated by the sign in the office window of the Celeste. It’s a No Vacancy sign, but the No is infrequently lit. Foot-high letters written in a cool blue neon script: they glow with a faint aura in the humid Florida dark:"