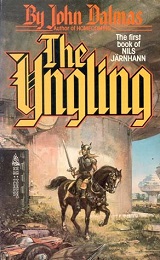 John Robert Jones (AKA John Dalmas born Sept 3, 1926)
"a veteran science fiction author with 27 published novels that include the Regiment series,  The Yngling series, and The Second Coming."  A few of his novels and short stories are freely available.

• "Gullikksen and the 500-Pound Hallucination"
"Ja. He needs a little of that from something live. But he gives me a lot more back. Mostly he gets vhat he needs from the boilers here. He vas so veak, you know, vhen I found him, and I bet he didn't veigh more than a couple ounces, but he got stronger fast vhen he could be by the stove. And vhen ve vas on vatch together, me and you, I could feel him getting stronger and stronger. Those boilers are good for him."

• "Moonlight Nocturne"
"I'd been stupid too. I should have just fallen out of the boat when they started to shoot, instead of diving overboard. Then they could have thought I was dead, same as Art was. It's a wonder I wasn't, the way they'd charged us shooting with Tommy guns."

• Soldiers
"Most of his people had spent the entire eleven years in a sleep so profound that aging was suspended; even he'd spent alternate months in a stasis chamber. Eleven years of hyperspace, mostly between spiral arms. On the screen's display of the F-space potentiality, there'd been whole months without the matric distortion of a single star. Only today had they seen two on a watch, both clearly unsuitable. And now a third. Judging by its mass not a promising third, but it was time to emerge, examine the starscape."

• The Puppet Master
"My name is Martti Seppanen, and I work for Prudential Investigations and Security, Inc. Things had been slow, and I'd had nothing much to do for a day and a half—since I'd finished rounding up the collusion evidence against Funsch, Carillo, and Wallace. So I stood there in my two-by-four office—ten by ten feet, actually—looking westward across the L.A. basin toward the higher rises of Lower Wilshire. While drilling Spanish."

At Author's Site: [All Novels and PDF downloads]