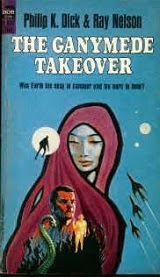 Radell Faraday "Ray" Nelson (born October 3, 1931)
A "science fiction author and cartoonist most famous for his 1963 short story "Eight O'Clock in the Morning" which was later used by John Carpenter as the basis for his 1988 film They Live." (Wikipedia).  His website is here.


Fiction
• At Baen: "Eight O'clock in the Morning" from Fantasy & Science Fiction. Nov. 1963.
"One of the subjects awoke all the way. This had never happened before. His name was George Nada and he blinked out at the sea of faces in the theatre, at first unaware of anything out of the ordinary. Then he noticed, human faces, the faces of the Fascinators. They had been there all along, of course, but only George was really awake, so only George recognized them for what they were. He understood everything in a flash, including the fact that if he were to give any outward sign, the Fascinators would instantly command him to return to his former state, and he would obey."

Audio Fiction
• At SFFaudio: "Eight O'clock in the Morning" read by Gregg Margarite.
"a complete and unabridged reading of the short story (16 Minutes) followed by a discussion of it with Jesse, Gregg Margarite and Ray Nelson himself!"
Posted by Dave Tackett at 2:11 PM

he was on the SFFaudio Podcast, and so was this story. :D

Awesome Jesse! I added the link to it.