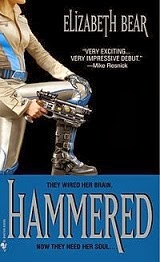 Sarah Bear Elizabeth Wishnevsky (born September 22, 1971)
A two-time Hugo Award winning (not counting her awards for "fancast") author and John W. Campbell Award for Best New Writer, Wishnevsky (AKA Elizabeth Bear) is extremely prolific and many of her works are, fortunately, freely available.  Already "one of the greats" she is likely to be a force in the speculative fiction genres for years to come.

Much more after jump break


Fiction
• At The Agony Column: "Botticelli"
"'Deranged Soviet.' The American lowered the binoculars, knowing without having to look that his partner's expression would be perfectly deadpan. 'Do you want to play or not?'"


• "The Cold Blacksmith" Fantasy.
"Weyland Smith raised up his head from his anvil, the heat rolling beads of sweat across his face and his sparsely forested scalp, but he never stopped swinging his hammer. The ropy muscles of his chest knotted and released with every blow, and the clamor of steel on steel echoed from the trees. The hammer looked to weigh as much as the smith, but he handled it like a bit of cork on a twig."

• "House of the Rising Sun"
"Sycorax smiled at me through the mantilla shadowing her eyes: eyes untouched by that smile. She lolled against a wrought-iron railing, one narrow hip thrust out, dyed red hair tumbling out of the black spiderweb of her shawl, looking like a Mac Rebennack song come to life."

• "War Stories" Science Fiction.
"So it's 2030, right? And I'm sprawled on my belly in the pile of rubble that used to be 100 Constitution Plaza, rifle fire skipping over my head, a broken rock gouging my groin just down and to the left of my armor. My neck wants to crawl into my helmet like a turtle jamming itself into its shell. There's a crater the size of Winterpeg under my nose, and busted rocks and shattered glass scattered all over Main Street. Suicide van bomb."


• "Mongoose" with Sarah Monette. Science Fiction.
"Izrael Irizarry stepped through a bright-scarred airlock onto Kadath Station, lurching a little as he adjusted to station gravity. On his shoulder, Mongoose extended her neck, her barbels flaring, flicked her tongue out to taste the air, and colored a question. Another few steps, and he smelled what Mongoose smelled, the sharp stink of toves, ammoniac and bitter."


• "Abjure the Realm"
"Riordan limped down the parapet to the next guard post, the soft sole of his left boot hissing on black granite as he hitched along in pursuit of the High-King. A cloak of tatters in colors gleaned from half a thousand fiefdoms swung from the bard's shoulders, but he had left his lute and his harp behind this afternoon. He was unarmed."
• "The Ladies"
"Quincy, Massachusetts, February 1797  Mrs. John Adams looked to her sewing. The sealed letter she ignored with such presence of intention rested on a round wooden table beside her as she tugged thread taut, knotted, and snipped it with the scissors hung on a ribbon around her neck."


• At Ideomancer: "Ice"
"Snow fell between us, gentling the contours of the battlefield where my brethren had died with their backs to a raging ocean, but I could see him sprawled in the gathering drifts among the gaunt bodies of a half-dozen of Loki's vile-wolves. A final abomination still panted nearby, a tar-colored monster struggling to rise as I approached. It had the strength neither to attack nor flee."

• At JohnJosephAdams.com: "And the Deep Blue Sea"
"The end of the world had come and gone. It turned out not to matter much in the long run."

• At Lightspeed: "Boojum" with Sarah Monette. Science Fiction.
"The ship had no name of her own, so her human crew called her the Lavinia Whateley. As far as anyone could tell, she didn’t mind. At least, her long grasping vanes curled—affectionately?—when the chief engineers patted her bulkheads and called her “Vinnie,” and she ceremoniously tracked the footsteps of each crew member with her internal bioluminescence, giving them light to walk and work and live by."


• "Love Among the Talus"
"You cannot really keep a princess in a tower. Not if she has no brothers and must learn statecraft and dancing and riding and poisons and potions and the passage of arms, so that she may eventually rule."

• "Sounding"
"Cully sees the fin whale as he's leaving Nantucket Harbor. A mother with calf; seventy-foot whale, and a forty-foot boat. She's gray as Wellington rubber, lined with long parallel lines. She rolls on her side to show him an eye big as his hand, dark and sweet. Dreaming."

• "Two Dreams on Trains"
"The needle wore a path of dye and scab round and round Patience's left ring finger; sweltering heat adhered her to the mold-scarred chair. The hurt didn't bother her. It was pain with a future. She glanced past the scarrist's bare scalp, through the grimy window, holding her eyes open around the prickle of tears."


• "Black is the Color"
"Sunrise light glazed the oblong cobbles along the north bank of the River Clyde. The thump of music from a barge-turned nightclub had ended hours earlier. Only the river—winding between stark industrial buildings on the south bank and condominiums on the right—remained. The river, silence, and the morning chill."


• "Snow Dragons" Fantasy.
"This is not a real dragon. But the men who come in the long trains creaking through deep drifts don’t seem to know that. They come with their armor and their axes, their spears and their shields. Some—the ones who think they’re clever—come with firearms, ignoring the old wisdom that only forged metal will slay a dragon."


•  "Faster Gun"
"It’s hundreds of miles from the nearest ocean, and a hundred times too big to be a ship. It looks like nothing anyone ever saw. And it’s crashed just outside Tombstone with something alive inside."

• "The Girl Who Sang Rose Madder"
"A real backstage mostly resembles the opening tease of The Muppet Show: dust, bustle, and unflattering light. Em had gotten over her delusions of glamour pretty fast, though the delusions of grandeur took a little longer to kick her off the ledge"

• "The Horrid Glory of Its Wings"
"My mother, Alice, is not my real mom. She’s my foster mother, and she doesn’t look anything like me. Or maybe I don’t look anything like her. Mama Alice is plump and soft and has skin like the skin of a plum, all shiny dark purple with the same kind of frosty brightness over it, like you could swipe it away with your thumb."


•  "The Something-Dreaming Game" Science Fiction.
"A special kind of pressure, high under Tara’s chin, that makes her feel heavy and light all at once. She kneels by the chair and leans across the edge, because if she faints, the chair will roll away and she won’t choke. She’s always careful."

• "Tideline" Science Fiction.
"They would have called her salvage, if there were anyone left to salvage her. But she was the last of the war machines, a three-legged oblate teardrop as big as a main battle tank, two big grabs and one fine manipulator folded like a spider’s palps beneath the turreted head that finished her pointed end, her polyceramic armor spiderwebbed like shatterproof glass. Unhelmed by her remote masters, she limped along the beach, dragging one fused limb. She was nearly derelict. "  Hugo Award Winner.


• "Wain" Fantasy.
"Garrett lowered her gaze from the beaten-copper diameter of a rising moon to regard the soft-eyed wampyr beside her. The dark fabric of his sleeve lay smooth under her fingertips. A breeze still tasting of winter ruffled the forensic sorcerer’s carefully arranged hair and shifted the jewels in her earlobes. “Thank you for coming, Sebastien.”"

• "The Tricks of London"
"That’s the third damned dead whore in seventeen days,” Detective Inspector Rupert Bitner said, his educated tones incongruous to his choice of words. He slurped tea loudly from the chipped enamel lid of a vacuum flask."

• "Two Dreams On Trains"
"The needle wore a path of dye and scab round and round Patience's left ring finger; sweltering heat adhered her to the mold-scarred chair. The hurt didn't bother her. It was pain with a future. She glanced past the scarrist's bare scalp, through the grimy window, holding her eyes open around the prickle of tears."

• "And the Deep Blue Sea"
"The end of the world had come and gone. It turned out not to matter much in the long run."


• At Subterranean: "Wax"
"Abigail Irene Garrett drinks too much. She makes scandalous liaisons with inappropriate men, and if in her youth she was a famous beauty, now she is both formidable—and notorious. She is a forensic sorceress, and a dedicated officer of a Crown that does not deserve her loyalty." 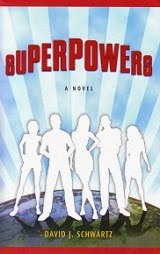 Fiction
• At Ideomancer: "Virginie and the Fool"
"From the first reports I had a feeling about her, and by the time she had a name it was clear that she was something special. Virginie. The talking heads all muffed it; they called her Virginia or Virgin-E. It's Virginie. It's French. Those last two letters are both pronounced, but subtly, with a trailing breath."


• "Destiny, with a Blackberry Sauce"
"During my brother Mel's final test to become a guard, he performed a flourish with his halberd and cut off his left foot. You wouldn't think it was possible to slice your own foot clean off while you're standing on it, but he managed. He says that he didn't really feel any pain at first, but he did feel the tendon in his leg rolling up like a window shade."

• "Iron Ankles"
"Naming the ankle-grabbers made them real, which was frightening. But it also made them knowable, and Wilma learned early in life that ignorance and fear were close relations. Before long she had a full taxonomic classification worked out."

• "The New Year's Party or Dancing on Sleipner's Bones"
"In Auckland I'm the last to arrive. Sven slaps a Zone Watch™ ("The Moto-Matter® Zone Watch™; Global Movement for When Swiss Isn't Enough") on my wrist, straightens my tie and hands me a glass of Daniel LeBrun."

• "The Water-Poet and the Four Seasons"
"Spring stands at the Water-Poet's door in a top hat and tails. He raises a white-gloved hand—the one not holding a white cane—to tip his hat. He asks the Water-Poet to write him a fog sestina, a dozen sudden downpours, and forty-three cool showers for tomorrow."


Audio Fiction
• At PodCastle: "The Somnambulist" Fantasy.
"The somnambulist brakes at the intersection of two suburban streets–Ivy Something Lane, Something Creek Road.  Her headlights illuminate the 2 A.M. silence.  She leans over to open the passenger side door and her husband, in the body of a grey squirrel, jumps in."
Posted by Dave Tackett at 1:22 PM