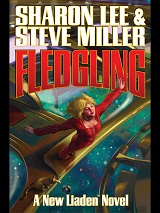 Sharon Lee (born September 11, 1952 )
A Golden Duck award winning, as well as Balrog Award nominated and Nebula preliminary nominated, science fiction, fantasy and mystery writer, Lee  is the co-author, with Steve Miller, of the Liaden universe novels and stories.  Several of her stories, all co-written with Steve Miller, are freely available and linked after the jump break.


• Fledgling with Steve Miller. Novel.
"Because," he said in his deep, calm voice, "in the culture predominant upon Delgado, children—by which I mean those persons who have not attained what that same culture deems as their majority—are understood to be submissive to, and the responsibility of, their biological mother." He raised a strong eyebrow. "Surely you are aware of these things, Theo."

• "Misfits" with Steve Miller.
"It was a pellucid, temperate morning. The humidity levels were just a point lower than the theoretical "perfect comfort" zone; the sky was an arcing blue-green bowl marred by neither cloud nor threat of rain. It was, in fact, a fine day for gardening."

• "Phoenix" with Steve Miller.
"She traveled early, when the friendly shadows helped hide her deformity, allowing her to negotiate the eight chancy blocks from the anonymous apartments she kept in a nondescript building—where the floor numbering was in fresher paint in Terran numerals than in the older Liaden—to the streets she depended upon for her living."

• "Where the Goddess Sends"
"Apologies, Noble Lady. The bag is mine. It contains the necessities of my trade. The repository of magics, you might say. Dangerous in untutored hands.” He gripped the disputed item and straightened, smiling with urbane idiocy.

• "A Spell for the Lost"
"THE WIND WAS out of the southwest, carrying the acrid odor of baking rock. The sun was out of the same quarter, and backlit the magician in the weed-choked square, casting spears of light into the eyes of his audience.  Moonhawk, the magician’s traveling companion for this month or so, sat on the cistern wall, face turned aside the sun-spears, and watched each gesture with care."

• "To Cut An Edge"
"He was, in fact, a good deal more lost than he wanted to be. It took him several seconds to realize that the continent overhead was not the one he'd secretly studied for—followed quickly by the realization that it was not even the world he'd expected."

• "A Day at the Races"
"THE SKY WAS nearly Terran blue overhead, shading to a more proper Liaden green toward planetary east. Shadows were beginning their long evening stretch across the lawns, from the topiary maze to the house.  Up the drive came a slender young man in the leather vest and leggings of a spaceworker. Despite the peremptory summons from his sister, he had walked from Solcintra Spaceport, enjoying the taste of natural air."

• Agents of Change with Steve Miller. Novel.
"THE MAN WHO was not Terrence O'Grady had come quietly.  And that, Sam insisted, was clear proof. Terry had never done anything quietly in his life if there was a way to get a fight out of it."

• "A Matter of Dreams"
"A child will dream the minutiae of life, relate the sending in the morning, all innocent and dewy-eyed; astonished when the dream events turn true next day—or next one.  She's watched then, for grandma will have contacted Temple, never doubt it; and after a time the child will dream the name of the one she had been Before. Then she'll be brought to Circle and trained to be one with the Dream." 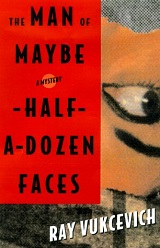 Ray Vukcevich (born 1946)
Vukcevich is a Nebula and Philip K. Dick Award nominated writer whose works have apperared on Baen.com, Strange Horizons, and elsewhere.  He has many short and flash fiction stories freely available.


• "The Wages of Syntax"
"Feed him to the alligators. Tie him up first. Make sure the alligators are really really hungry. Don’t feed them for weeks. Wait until they’re so hungry you’ve got to poke them back into their scummy concrete pond with a big stick. Smother him."

• "Human Subjects"
"She dabbed delicately at the corners of her mouth with her napkin and then looked up at me with startling blue eyes. Whenever Evangeline looks at me, really looks, I’m split into who knows how many pieces, and I become the particle or the wave in the classic double-slit experiment of quantum mechanics."

• "Chain"
"Nathan had turned off the kerosene lamp before they made love so they would not be a silhouette show on the side of the tent, but now that they were done, he lighted it again so he could catch up on his reading. Tomorrow they would both be back on the dig desperately trying to get what they could before the ancient city of Zeugma was drowned by the rising waters of the Euphrates River behind the new dam. There was so much to do and so little time to do it."

• "The Button"
"I was down to my last clean white shirt, and it was missing a button — the third one down from the collar, and I hadn’t a moment to decide what to do about it. I would be late if I didn’t just put the shirt on and go. If the missing button had been one lower, I would have had to expend a lot of energy keeping my belly covered, but as it was I thought maybe I could fool Edna Bloomfield. You did not attend a cello consultation with Ms. Bloomfield looking sloppy."

• "Over Here"
"I suspect my daughter Amelia and that man she married named my granddaughter after a character from Japanese animation. I never did press the point, and now we’ll never know for sure. She is my Megumi who is even now hiding in the yard. Right over there. Under the big Douglas fir tree. She is holding so very still like a cautious rabbit. She is afraid I will call her inside to play the clavichord."


• "Mom’s Little Friends"
"Because he wouldn’t understand, we left Mom’s German shepherd Toby leashed to the big black roll bar in the back of Ada’s pickup truck, and because Mom’s hands were tied behind her back and because her ankles were lashed together, we had some trouble wrestling her out of the cab and onto the bridge."

• "No Comet"
"Convinced that my slant on Bohr’s version of the Copenhagen interpretation of quantum mechanics was our last hope, I bullied Jane, who didn’t want to be married to me anymore, and Sacha into cooperating with a final desperate attempt to save the world."

• "Whisper"
"And then she fired her parting shot. “And not only that,” she said, as if “that” hadn’t been quite enough, “you snore horribly!”"


• At The Infinity Matrix: "In the Flesh"
"Thinking about traveling made me feel a little queasy, but it was time to move the meat. I had to do it, had to bite the bullet, grab the bull by the horns, get tough and get going or get off the pot or whatever."

• At Son and Foe: "In Which an Angel Offers Instruction on the Meaning of Life"
"There was an angel-shaped hole in Spencer’s living room. Wings, halo, sandals, the works. The angel was missing; all that was left was the place where it had been. This was surely a spiritual dilemma, a heavenly lacuna, an essential element that had gone elsewhere: the thing that proved its existence by its very absence."

Flash Fiction
• At Baen: "My Eyes, Your Ears"
At Flash Fiction Online:
• At The Journal of Compressed Creative Arts: "Out On The Ice"
At On Earth As It Is:
• At SmokeLong Quarterly: "A Funny Smell"
At Strange Horizons: